The international humanitarian organization greatly increased its efforts in the face of the COVID-19 pandemic and was recognized this year by the Nobel Committee for its outstanding leadership in working toward food security in 88 countries and counting. Emily Fredenberg from WFP Rwanda explains how she and her WFP colleagues have been affected by the award—and how their mission to achieve "Zero Hunger" is still far from over.

The World Food Programme (WFP) is the largest international humanitarian organization committed to addressing hunger and promoting food security across the globe, with a bold but achievable goal of Zero Hunger by 2030. Originally created in 1961 based on an idea from President Dwight Eisenhower, WFP began as an experiment by the US federal government in providing food assistance through the United Nations system, immediately making a massive impact after an earthquake in Iran, a typhoon in Thailand, and a refugee crisis in Algeria.

Since then, the organization has grown to have offices and development programs across 88 countries, and it has considerably increased its efforts in the face of the COVID-19 pandemic. Because of this life-changing work, WFP was recently awarded The Nobel Peace Prize for 2020. As the Nobel Committee put it, WFP earned the illustrious recognition "for its efforts to combat hunger, for its contribution to bettering conditions for peace in conflict-affected areas, and for acting as a driving force in efforts to prevent the use of hunger as a weapon of war and conflict."

"Globally, WFP reached 97 million people last year and is on track to reach millions more by the end of this year," says Emily Fredenberg, Head of External Partnerships and Communications for WFP Rwanda. "So, we rose to the challenge," of an ongoing pandemic.

For Fredenberg and many of her coworkers in Rwanda, serving the local community is the driving force of her role. "I work alongside colleagues that are from all over the world, including Rwanda, and many of my Rwandan colleagues have been with the organization for decades," she says. Some of those current colleagues were among the people who received help from WFP after the 1994 Genocide against the Tutsi in Rwanda.

"It's definitely a heartwarming story to see people who have been there in their darkest hour, and now they're giving back to their country because they really know what it's like to need food assistance," Fredenberg adds. "When someone says to you, 'I don't know where I'll be able to find my next meal and [your effort] is really helping me put food on the table,' sharing those stories and meeting those people helps me get out of bed each morning." 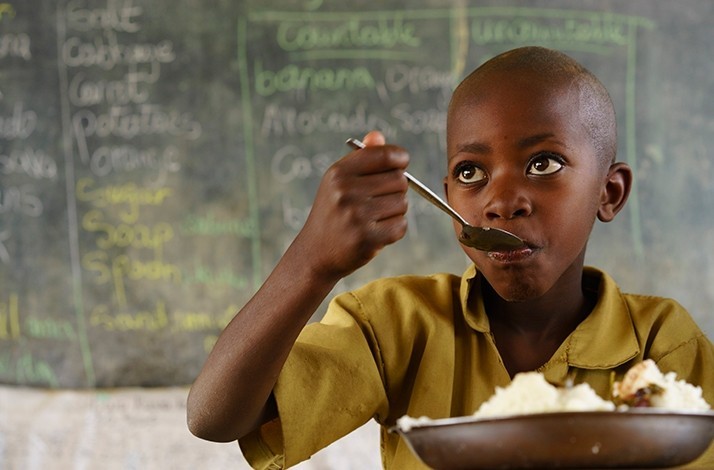 While receiving the Nobel Peace Prize is important recognition for everyone at WFP, it's just the beginning. "We feel really honored and also humbled by this prize," says Fredenberg. "This is also a recognition for all of the 690 million people worldwide who are hungry—that they have a right to live in a world without hunger."

COVID-19 has been a daunting challenge to WFP's progress toward Zero Hunger. "Rwanda really had a complete shutdown of the country for a good six weeks, where people could not move between districts and almost no businesses were open; it was very limited in what people could do, and the country was certainly impacted," reflects Fredenberg. Worldwide, 235 million people are expected to need humanitarian assistance next year, a 40% increase since the beginning of 2020.

Schools were forced to shut down, causing countless families to go without the WFP-provided in-school meals that would normally sustain them. Adapting to the situation, the organization transferred the commodities that couldn't be used in schools to the students' parents, so the ingredients could instead be used for meals at home. Meanwhile, WFP assisted in infrastructure support, building new school kitchens, connecting schools to safe water systems, and increasing the level of school sanitation to ensure safety when children can return to classrooms.

In the meantime, the World Food Programme is continuing to do everything it can to keep people fed and safe indoors as the world awaits the distribution of COVID-19 vaccines. "Food assistance is really important to making sure that people are able to stay home during this time and not further spread the virus," explains Fredenberg. The organization is also supporting local farmers to stay afloat now and after the pandemic subsides. "WFP's development programs are really important to help communities recover from the pandemic, so they can get back onto their feet and get back to business as usual and, hopefully, be more resilient," she says.

Mastercard is proud to be a longstanding partner of WFP and has been committed to the school feeding program since 2013. To learn more about WFP, get involved, or make a contribution, visit World Food Programme online.