The renowned Mexican American chef taps into his memories to create a trio of recipes inspired by the holiday that pair perfectly with the premium KAH Tequila. Try your hand at Delgado's version of tortita de papa, pozole rojo, or chicken tamal with mole poblano and host a spirited celebration of your own.

Chef Alan Delgado can trace his appreciation for Día de los Muertos back to his childhood, which was spent in the border towns of El Paso, Texas, and Ciudad Juárez, Mexico. Rather than a reflection on loss, the acclaimed chef knows it's a celebration of lives lived, which is why he's partnering with KAH Tequila to create a collection of tantalizing new recipes for the holiday.

He's the perfect chef for the task, possessing a rich background in Mexican cuisine that's been refined in some of the top kitchens in the US. After moving to Austin as a teenager, Delgado spent a decade working in the city's most notable restaurants before heading to New York to continue developing his signature style.

Here, Chef Delgado shares his takes on three staple Mexican dishes—one to pair with each expression of ultra-premium KAH Tequila—inspired by memories of his mother and the Mexican traditions he loves. 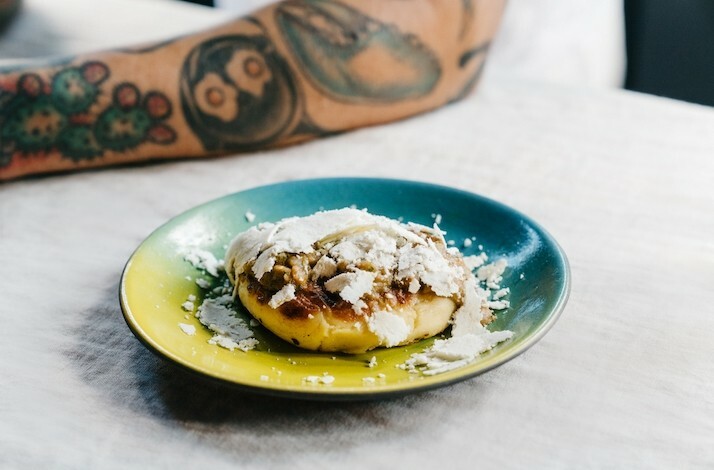 "This is a dish that my mom used to make for us, and I'd have at least 20 a day," Delgado says. "Food was one of the ways that she showed us how much she loves us, and I pay tribute to her by making these for everyone to share."

Place potatoes in a pot and cover with water. Season the water with 1 tablespoon salt and simmer until fully cooked. Poke the potatoes with a skewer or knife. If the utensil slides easily all the way to the center, the potatoes are done.

Pull potatoes from the water and allow to cool slightly before peeling. Once peeled, place potatoes in a bowl with the rest of the ingredients and mash until mixed through. You should be able to pick up a handful of mashed potatoes and shape them into a ball. If the potatoes are sticky, gently mix in more breadcrumbs.

Portion your potatoes into evenly sized balls and flatten into little pancakes. Allow to cool before searing.

Liberally oil the bottom of a skillet and turn to medium-high heat. Drop the potato tortitas into the hot skillet and cook until golden brown, then flip and cook the other side.

Lightly oil the bottom of a hot skillet and char all of the vegetables, taking care not to overcrowd the pan. Place all ingredients into a blender and process until a smooth salsa is achieved. Season with salt and lime juice to taste.

Place a tortita on the plate followed by a couple of spoonfuls of salsa. Garnish with shaved queso fresco. 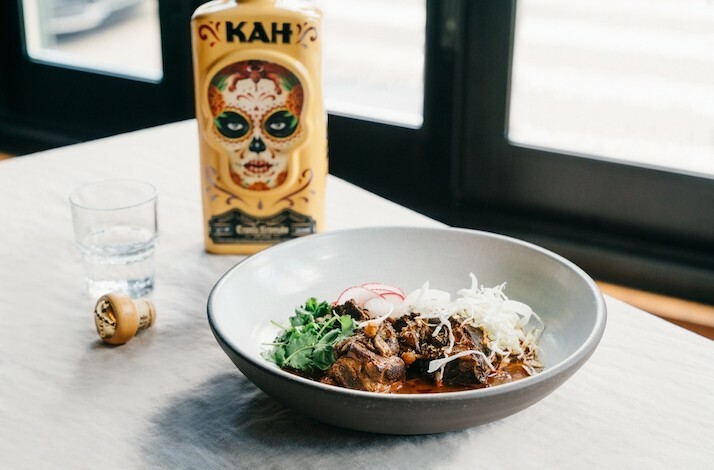 "This is a classic Day of the Dead dish that you can cook throughout the day while you plan the rest of your festivities," Delgado explains. "It's perfect to eat late at night, or the morning after a celebration."

Season the pork with salt. Heat a small amount of oil in a large pot and sear the pork. Remove the pork and add garlic and onions. Cook the onions for 10 minutes on medium heat or until cooked through. Add the rest of the ingredients except the pork and hominy. Bring to a boil and then turn off and let sit for 20 minutes. Place ingredients and broth in a blender and process until smooth, then return to pot with the pork and simmer until the pork is tender.

Once the pork is tender, add the hominy and cook for an extra 15 minutes. Add a little bit of stock if necessary to thin out the broth.

Ladle 8 ounces of pozole into a bowl and garnish.

Pair with KAH Tequila Reposado. The sweetness of the reposado balances the heat of the pozole. 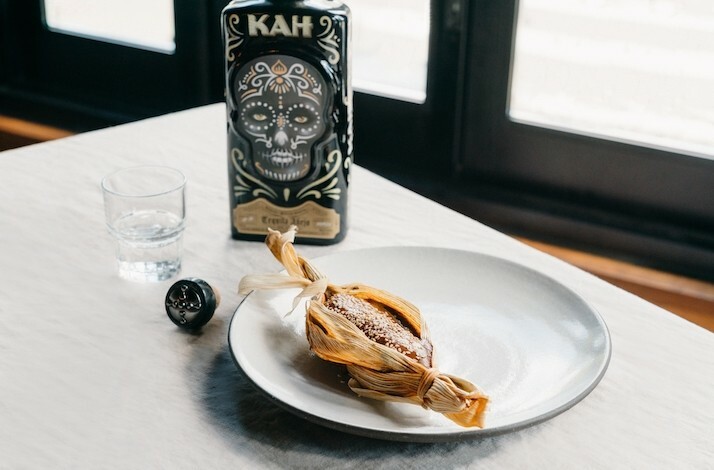 "This is inspired by two Day of the Dead dishes, tamales with salsa verde and chicken with mole poblano," Delgado says. "Tamales and mole are staples of Mexican cuisine."

Using a stand mixer or a whisk and bowl, start by whipping the shortening, baking powder, and salt. Whip until the mix becomes shiny like icing. Slowly start adding the masa and whip until thoroughly mixed. Add water in quarter amounts until a well-hydrated dough is achieved. The dough should be able to be easily spread with a spoon or spatula. Cover with plastic and allow to rest for 1 hour.

Place ingredients in a pot and simmer until the chicken is cooked through. Once cooked, remove the chicken and allow to cool, then shred. Reserve the chicken stock to make the mole poblano.

Toast the peppers in a dry skillet, then place in a container with the hot chicken broth and the black raisins for 20 minutes until the peppers become pliable. Toast the nuts, seeds, and spices individually until the nuts and seeds are golden brown and the spices are aromatic. Add to the peppers.

Toast the bread and tortillas in a dry skillet or comal (smooth, flat griddle).

Place all items in a blender except for the chocolate and process until smooth, then transfer to a pot. If the consistency is too thick, add twice the amount of water and simmer for 6 hours. Be careful not to burn and add water as necessary. Mole is a sauce that needs time and attention. The more time this sauce spends on the stove, the better it will taste.

Add 1 ounce of chocolate at a time until your mole is balanced. Place the mole in a blender and process until smooth and pass through a fine-mesh strainer.

Place 3 tablespoons of oil in a pot and heat until oil starts to get smoky. Turn the heat off and carefully pour the mole. Stir with a whisk as you are pouring the mole to prevent splatter. Turn the heat back on and simmer for 10 minutes. Season with salt.

Toss the chicken with enough mole to coat and set aside.

Begin by pulling the husks out of the water and drying them with a paper towel. Make sure you use the largest pieces. Place a spoonful of masa in the middle of the husk and spread into a 2- to 3-inch square, leaving space around the edges. Add chicken down the middle of the dough. Make sure to leave enough space for the tamal to seal. Fold the sides like a taco to seal the tamal. Place on the table and gently roll into a tight taquito.

Shred a couple of pieces of hydrated husk and tie each end of the tamal so it looks like a bow tie. Put water in your steamer and bring to a simmer. Place the tamales in the steamer and cook for 45 minutes. Allow the tamales to sit for 15 minutes before heating back up to enjoy.

Carefully cut the husk down the middle. Pull the husk to reveal the tamal. Cover with mole poblano and garnish with toasted sesame seeds.

Pair with KAH Tequila Añejo. The complexity of the mole pairs well with the chocolate, coffee, and tobacco notes found in the tequila añejo.