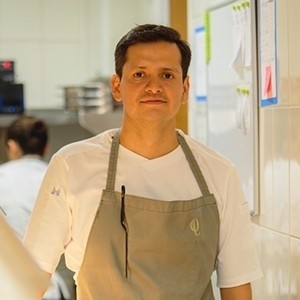 After discovering his love for cooking as a teenager, Vallejo entered the Mexico Culinary Center to study Culinary Administration and Arts. His restless spirit led him to set sail with Princess Cruises in 2004, where he worked on voyages that navigated to all corners of the globe. Back on land, he joined the team at Pujol and was later a Corporate Chef at Grupo Habita and Executive Chef at the St. Regis hotel. In 2012, alongside his wife Alejandra Flores, Vallejo opened Quintonil, to develop a cuisine that would emphasize Mexican ingredients and traditional techniques to transform them into today's context. Today, Vallejo concentrates on product and flavor quality by working with regional producers who spark a positive impact on their communities and on the ecosystems where they live. Quintonil is No.11 on Latin America's 50 Best Restaurants 2019 list. Quintonil is ranked # 24 on San Pellegrino's "World's 50 Best Restaurants".