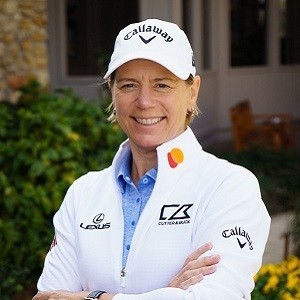 Annika is often regarded as the greatest female golfer of all-time. During her 15 year, Hall-of-Fame career, she rewrote the LPGA and Ladies European Tour record books, won countless awards, and changed the way women’s golf was played, viewed and covered.

She amassed 89 worldwide victories, including 72 on the LPGA and 10 Major Championships.  Annika holds a record number of Rolex Player of the Year awards (eight) and Vare Trophies for the lowest scoring average in a season (six).  As the only female to break 60 in an official event, she has been nicknamed “Ms. 59.”  Perhaps most notably, Annika received worldwide media attention when she became the first woman in 58 years to play in a PGA TOUR event at the 2003 Colonial Invitational.

Despite stepping away from competitive golf in 2008, Annika still tops the LPGA’s All Time Money List. She was the Associated Press Female Athlete of the Year from 2003-2005, and the Golf Writers Association of America Female Athlete of the Year in 1995, 1997 and from 2000-2005. She represented Europe as a player in eight Solheim Cups, as a vice-captain three times and Captained the European team in 2017.

Annika stepped away from professional golf after the 2008 season to focus on her family and the ANNIKA brand of businesses, which include the ANNIKA Collection of high-end women’s golf apparel and ANNIKA Course Design.  In 2007, she created the ANNIKA Foundation, which provides golf opportunities at the junior, collegiate and professional levels while teaching young people the importance of living a healthy, active lifestyle through fitness and nutrition.

The Foundation annually conducts six major tournaments for aspiring junior girls and the ANNIKA Intercollegiate Presented By 3M, a college tournament featuring 12 of the top Division I schools which has had the strongest field in all of college golf each year since its inception.

With the support of Stifel and the Haskins Commission, the Foundation created the ANNIKA Award Presented By Stifel in 2014, which is given annually to the best collegiate female golfer.