With support from the Mastercard Enablement Programme, brothers Diego and Álvaro Sarmiento launched the Seeds Project, which brings their documentary film to rural Andean communities and imparts knowledge of traditional farming methods. Here, Diego shares his thoughts on teaching young people how to protect their land for future generations—and the importance of having the right partner to help spread the word.

With Mothers of the Land, Peruvian filmmakers Diego and Álvaro Sarmiento are doing more than just entertaining audiences around the world. They're educating, enlightening, and inspiring people in rural Andean communities to embrace sustainable agriculture techniques that can keep their land healthy and productive for future generations.

In the film, which follows five women who farm in the Peruvian high mountains, Diego and Álvaro show the struggle of the indigenous population of the Andes for survival and identity. Not only do they face the difficult conditions of high-altitude farming, but the farmers now must also cope with the consequences of climate change in Peru, which has caused shifts in the growing season, unpredictable rainfall, and other challenges.

Making their 2019 documentary was only half the battle. Once it was finished, the two brothers set out to share it with the world—and Peru, in particular—in the hopes that its message of environmental stewardship would resonate.

Their effort got a big boost last year at Berlinale Talents, the talent development initiative of the Berlin International Film Festival. There, Diego was named one of the winning fellows of the 2020 Mastercard Enablement Programme, which provides filmmakers with financial support and coaching for projects revolving around sustainability.

It was just what they needed to launch the Seeds Project. Through this unique program, the filmmakers show Mothers of the Land to indigenous children in remote regions of the Andes and engage them in conversation. 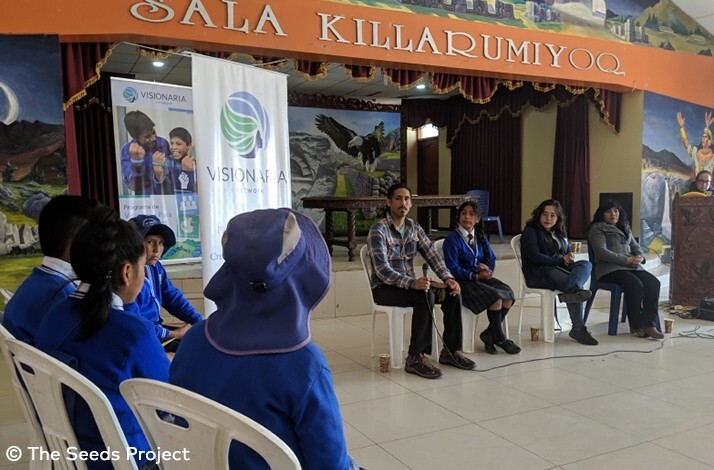 It's a labor of love for the brothers, who are of Quechua descent like their documentary subjects.

"They are the farmers and community leaders of tomorrow," Diego says. "We want to make them proud of their indigenous origins and anchor knowledge about traditional, sustainable agriculture in the communities."

With their film screenings, which they organize in village schools and other community spaces, Diego and Álvaro accomplish several goals. They create opportunities for Peruvian youth, who often live far away from each other, to meet and learn together. And, they initiate discussions about a variety of important topics, from the future of their country and climate change to protecting the environment and indigenous ways of life.

Diego says support from the Mastercard Enablement Programme has been crucial in getting the message out.

"The Seeds Project not only receives financial and material support from Mastercard, but also valuable know-how," he explains. "We are receiving active support in the realization of an information campaign, which we are implementing strongly regionally in order to be able to reach the rural population everywhere."

The partnership gives Diego and Álvaro access to engaging spaces to hold their screenings as well as a variety of educational materials designed to connect with their audiences.

"We work with interactive comics, for example, to make learning interesting," Diego says.

The pandemic has slowed the Seeds Project, but the filmmakers have used the time to hone their ideas and plan new strategies to promote sustainable agriculture in the Andes. Diego says they look forward to hitting the road again soon.

In the meantime, their film is making a big impact on viewers. Mothers of the Land has won numerous awards, including Best Documentary Feature at Peru's AQP Film Festival and the UAE's Sharjah Film Platform. Selections were even shown as an exhibition at New York's Museum of Modern Art.

Looking for even more inspiration from some of the world's best up-and-coming filmmakers? Stay tuned in 2022, when emerging talents will again be selected for the Mastercard Enablement Programme as part of Berlinale Talents.