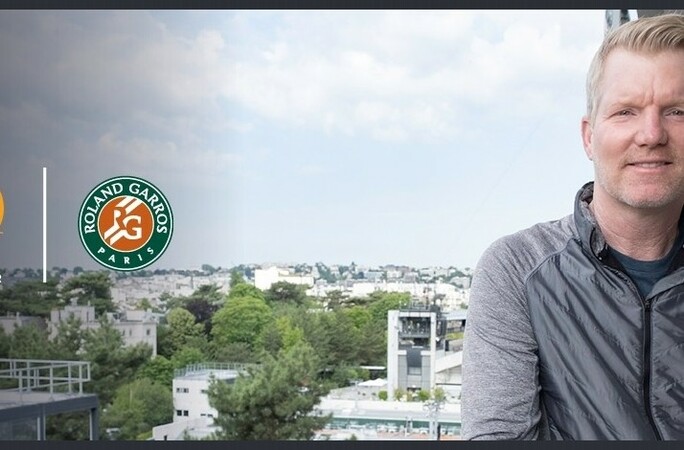 The four-time Grand Slam winner is busier than ever these days as a tennis commentator, giving him a unique perspective on a sport that's just starting to welcome fans back into the stadium. Here, he reflects on the 30th anniversary of his first Roland-Garros title, the challenges facing young players today, and the unique way he handled finals-day stress.

The intensity level of a Jim Courier interview may have waned over the years, but the legendary right-hander is still deeply involved in tennis. His work as a commentator keeps him at the centre of the action; most recently, that meant heading to Paris for the 2021 Roland-Garros.

The tournament marked a new beginning of sorts, as greater numbers of fans were allowed in the stands after a delayed 2020 Roland-Garros last fall that was all but empty.

"For me, it feels like a rebirth, and we're starting to feel the energy come back into Roland-Garros," Courier says. "The October version was very strange and subdued because of COVID-19, but now we're beginning to see the light at the end of the tunnel."

In fact, the winner of four Grand Slams—including two Roland-Garros titles—is already looking forward to coming back next year when capacity is back to 100%.

"As good as it felt to have 5,000 people in the stands here at the end of this tournament, this is a rebuilt Philippe-Chatrier stadium and we've never seen it filled with 15,000 in its new configuration," he says. "These are the normal signposts for people in the tennis world: you come to Paris in the spring, you see your friends, you see the best tennis in the world, and you get to experience all of the city. We've missed that."

This year's tournament marked the 30th anniversary of Courier's first Roland-Garros victory in 1991 at age 21, a memory he holds dear.

"It's a life-changing experience for anyone who's lucky enough to lift one of these trophies. It certainly changed mine, but that was back when it was very common for players to win in their early twenties," Courier says. "More of the slams were being won by players in their early twenties than those in their late twenties, and almost no one was winning slams in their thirties, which is quite common these days."

According to Courier, today's tennis landscape is unique in that the top level is occupied by both veteran and early-career players. The recent Roland-Garros men's final was a perfect example, as 34-year-old Novak Djokovic defeated 22-year-old Stefanos Tsitsipas for the title.

"It's really a testament to the durability and the longevity of these great champions like Rafa (Rafael Nadal) and Novak (Djokovic), who are still doing it at the very highest level in their mid-thirties," Courier says. "It's challenging the younger generation, and the Zverevs (Alexander Zverev) and Tsitsipases (Stefanos Tsitsipas) are really having to work hard to try to get up to their level."

"Everyone wants to win," he continues. "But when you have the skills that these top players who have been around a long time do coupled with their experience and their enthusiasm, it's a very difficult thing to get through."

One thing that hasn't changed is the intense pressure that players feel before big matches, something Courier is intimately familiar with.

"The day of a final is filled with nervous tension and anticipation and, in my experience, a very strong commitment to staying in the moment," he says. "You're trying to stay siloed and focused because if you allow those feelings to creep in, it can suppress your performance."

So what was Courier's secret to transcending the tension?

"I liked to read a book prior to going on court, which allowed me to escape a little bit and go into another world," he says. "A lot of players these days listen to music. Rafa plays Parcheesi (board game) with his team. And Iga Świątek, earlier in the tournament, was building with Lego to distract herself. There are all kinds of ways that players try to get themselves in the right frame of mind."

For more insights, listen to the full podcast here and be sure to check out last year's Jim Courier interview.