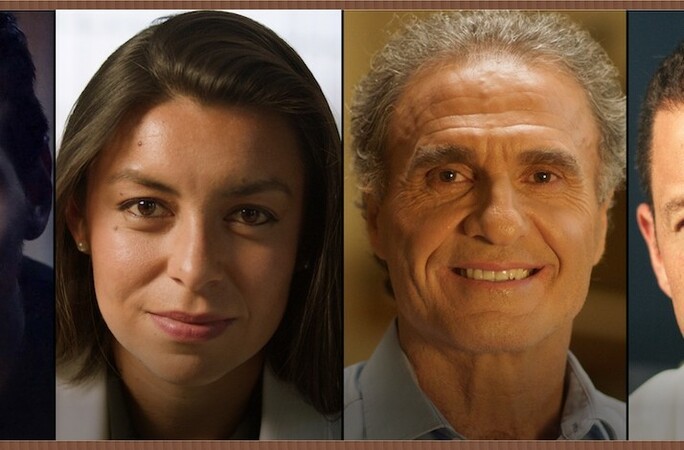 Hear how international football icons Lionel Messi, Óscar Córdoba, Oscar Ruggeri, and Yoreli Rincón followed their dreams to become who they are today by maintaining an optimistic outlook on life, while taking in some of their best career highlights.

Football stars Lionel Messi, Óscar Córdoba, Oscar Ruggeri, and Yoreli Rincón didn't become stars with ESPN highlight reels overnight. In the videos below, you'll see some of their most thrilling career performances and hear how these sports icons fueled themselves with hope and optimism to overcome difficult situations on their respective roads to fulfilling their lifelong dreams, both on the pitch and beyond.

Known to many as the greatest football player in history, Lionel Messi left his home country of Argentina at the age of 13 to begin his professional football career with Barcelona, where he started on the path to becoming the icon he is today. With six Ballon d'Or titles under his belt, including four he won consecutively, along with countless accolades, such as leading La Liga and the Argentina National Team in goal-scoring history, Messi's resume is vast. Yet he had to overcome plenty of adversity to get to where he is today. Mastercard spoke with Lionel Messi, to get his thoughts on playing in the CONMEBOL Copa América and what it would mean to win it after reaching back-to-back finals against Chile in 2015 and 2016. To hear him discuss the impact of playing for Argentina, tune in to the next video.

As Colombia's all-time record holder for most-capped goalkeeper, Óscar Córdoba is a living legend with an array of individual awards, including Best Goalkeeper in multiple Copa Libertadores. To top that off, he was part of the team that kept Colombia's net free of any goals in the CONMEBOL Copa America 2001 competition that his country dominated, winning five of six shutout games in the history-making tournament, along with another Best Goalkeeper award. But his journey wasn't always easy. Gain insight into how Córdoba overcame the odds in his storied career in the following clip.

With a career that started with comparisons to Brazilian football great Marta, Yoreli Rincón has always had to deal with larger-than-life expectations on the pitch. Her career is still just beginning, but her skills have taken her from her home country of Colombia all the way to Sweden, the United States, and Italy, where she currently plays as a midfielder for Inter Milan. In 2010, she helped Colombia qualify for its first FIFA Women's World Cup. That same year, she helped lead her country to the 2010 Sudamericano Femenino finals. Discover more about Rincón's burgeoning football career, see some of her top highlights, and find out how she keeps her spirits high as a competitor, even on the toughest days.

Oscar Ruggeri had an illustrious career with the Argentina National Team. He was the captain when he won the CONMEBOL Copa America in 1991 and 1993 and he helped win the 1986 FIFA World Cup. He also played with multiple clubs, including Boca Juniors, where he won a league title with Diego Maradona in 1981, and Rio Plata, where he won the Copa Libertadores, the Copa Interamericana, and the Intercontinental Cup, all in 1986. Learn how he managed to maintain his focus to become one of the most heralded players in Argentina's history, and a manager for clubs across the world after retiring from the game, while enjoying some of his best in-game memories in this next video.