A crushing 4-0 defeat in the first leg of the UEFA Champions League Round of 16 pushed Barcelona to the brink of elimination. With the odds stacked against them, Barça turned in a remarkable performance in the second leg for a 6-1 victory that would go down in history as La Remontada ("The Comeback").

When discussing football's greatest comebacks, it's essential to include the game that actually earned the nickname "The Comeback." FC Barcelona's win against Paris Saint-Germain FC in the second leg of the 2016-2017 UEFA Champions League Round of 16 resounds to this day as a triumph of spirit and determination. After a defeat that left some writing the squad off, Barça tapped into the hopes and passions of fans around the world to prove their critics wrong.

The story begins with Barcelona losing to Paris Saint-Germain FC in the first leg at Parc de Princes by a score of 4-0. It was a humbling moment for the Spanish team, which boasted superstars like Lionel Messi, Neymar, Luis Suárez, Andrés Iniesta, and Gerard Piqué. Messages like "The age of Messi is over!" and "Neymar is overrated!" proliferated over social media.

Advancing to the next round would be a tall order for FC Barcelona, requiring at least four goals in their rematch. Yet the team was determined to regroup after the loss, eager to show their time had not yet passed. FC Barcelona's chance to advance to the next round in the rematch of 4-0 was only 0.4%. 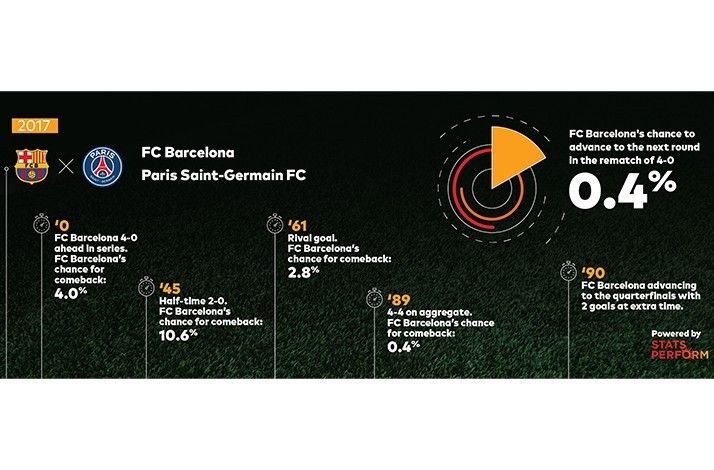 Suárez scored at just three minutes in, and an own goal by Paris Saint-Germain FC in the 40th minute—an attempt to block a shot by Iniesta—gave Barcelona a 2-0 lead into halftime. A successful penalty kick by Messi gave the home side another boost going into the second half, but PSG wouldn't go quietly, with Cavani scoring in the 62nd minute to make it 3-1.

Now needing three more goals to advance thanks to the away goals rule, Barcelona turned up the heat. Neymar knocked in a free kick in the 88th and a penalty in the 91st minute. As if to amp up the drama, the final act of magic occurred in the final seconds of the match, as Neymar delivered a cross to Sergi Roberto, who put it in the net. The 6-1 victory for FC Barcelona sent them to the next round—and into history as one of football's greatest comebacks.

Relive the excitement of other legendary comebacks from Manchester United FC, AS Roma, and more of your favourite teams here.