Breaking down a Manchester United FC comeback, one of the best in UEFA Champions League history

After trailing by one through the 90th minute, the Red Devils achieved what seemed impossible, edging out FC Bayern München with two dazzling goals in injury time. Here, we break down the highlights of this unforgettable match—along with the odds that Manchester United FC fans can't believe they defied to this day.

The date was 26 May 1999. The setting was Camp Nou in Barcelona. And what happened would go down in football history as one of Manchester United FC’s best comebacks.

Manchester United FC and FC Bayern München had advanced to the UEFA Champions League finals, both teams stacked with the world's top players. Managed by the legendary Alex Ferguson, the Red Devils' lineup included superstars like David Beckham, Ryan Giggs, Dwight Yorke, and Andy Cole. The FCB, under coach Ottmar Hitzfeld, boasted heavyweights such as Oliver Kahn, Lothar Matthäus, Mehmet Scholl, and Hasan Salihamidžić. As the teams took the field, it was clear that neither would allow the other an easy path to the trophy.

Yet once the game began, things quickly took a turn for the worse for Manchester United. Six minutes in, Ronny Johnsen fouled FC Bayern München's Carsten Jancker, setting up a free kick that teammate Mario Basler poked through the wall to score. FC Bayern München was ahead 1-0, and despite putting together several attacks, Manchester United FC was unable to equalise.

But the English team and its fans never gave up hope, and a substitution that put striker Teddy Sheringham on the pitch would turn out to be a pivotal decision by Ferguson. The magical moment would occur after 90 minutes of regulation had expired and the referee indicated three minutes of injury time. Manchester United FC’s chance of winning in 90+ was only 1.8%. 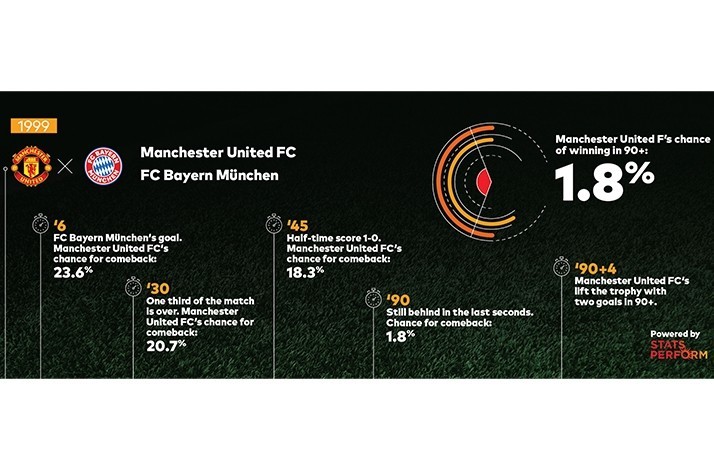 Time was running out, and FC Bayern München fans were already starting to celebrate when Manchester United FC won a corner kick. Beckham inbounded the ball, and, after a few frenzied seconds of action, Sheringham put it in the back of the net. The match was now tied 1-1.

This close to the final minutes, extra time seemed inevitable, yet it wouldn't be necessary. After play resumed, Manchester United FC quickly earned another corner. Once again, Beckham put the ball in play, and once again Sheringham got a touch, but this time he sent the ball to Ole Gunnar Solskjær, who tapped it into the FC Bayern München goal. It was all Manchester United FC needed to clinch a 2-1 victory and the 1999 UEFA Champions League title.

If their victory after trailing for nearly the entire match seems extremely unlikely to you, you're right. Check out the infographic to see just how long the odds were, and appreciate just how incredible the win—one of Manchester United FC’s best comebacks—really was.

Relive the excitement of other legendary comebacks from Liverpool FC, AS Roma, and more of your favourite teams here.