Down 3-0 to a powerhouse AC Milan club that featured stars like Kaká, Pirlo, Shevchenko, Maldini, and Crespo, Liverpool FC staged a blistering comeback with three scores in under ten minutes in the second half, eventually winning on penalty kicks to overcome nearly impossible odds to win the championship. This is the story of one of football's best comebacks in history, known as the Miracle of Istanbul.

Some say certain leads are insurmountable in football. Probability would back this up almost completely, but as fans of Liverpool FC know, there's always a glimmer of hope for an epic comeback.

One of the best Liverpool FC comebacks was in 2005. The Reds were playing in the UEFA Champions League Final against a powerful AC Milan club. The match was played on neutral ground at Istanbul's Atatürk Olympic Stadium, yet AC Milan was the heavy favourite thanks to their elite lineup that featured household names like Kaká, Andrea Pirlo, Andriy Shevchenko, Paolo Maldini, and Hernán Crespo.

From the start, things looked shaky for Liverpool FC. Under a minute into the match, Maldini got AC Milan on the board after a perfect setup from Pirlo. Liverpool's probability of coming back at this point was a mere 10.3%. It got worse from there. 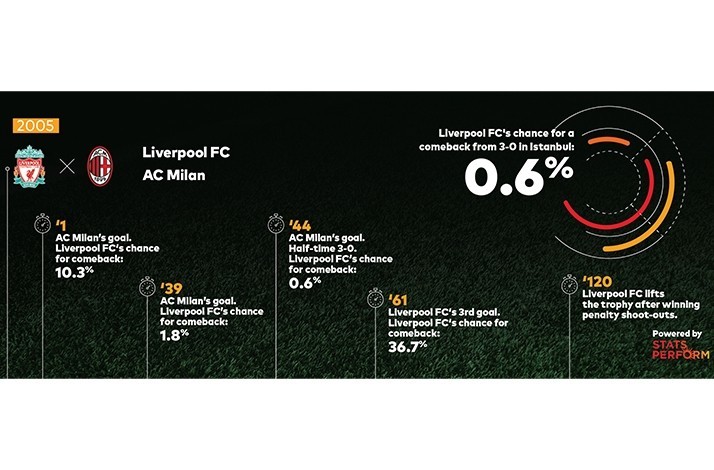 At minute 39, Shevchenko connected with Crespo on a breakaway leading to another goal, putting the favourites up 2-0 and dropping Liverpool FC's victory odds to just 1.8%. As if they weren't already feeling deflated, Liverpool FC's woes would continue, with Crespo tacking on a third AC Milan goal right before half-time.

Still, despite being down 3-0 and with only a 0.6% probability of winning at this point, Liverpool FC came out of the break feeling motivated after an impassioned speech by manager Rafa Benítez. It took less than 10 minutes into the second half for team captain Steven Gerrard to get them on the board with an extraordinary header at minute 54. Fans in attendance and at home started to have hope.

Just two minutes later, Vladimír Šmicer snuck the ball through heavy traffic past AC Milan goalkeeper Dida to make it 3-2, and Liverpool fans began to believe. Less than five minutes later, Xabi Alonso was awarded a penalty kick. Dida blocked his initial strike but couldn't corral it, leading Alonso to run in for a follow-up that went over the goalkeeper's flailing body. Comeback complete.

But there are no ties in the UEFA Champions League Final, and if Liverpool was going to pull off the seemingly impossible feat of beating powerhouse AC Milan, they'd need to put the ball in the net again—and overcome just a 36.7% chance at defeating the superior squad.

After extra time, the match remained tied and eventually came to a head with penalty kicks. Liverpool FC went up 2-0 to start, but after some outstanding scores, AC Milan tied it at two goals apiece. Liverpool FC's fifth kicker was Šmicer, who scored right-side past Dida to make it match-point. It was then up to Shevchenko to tie it for AC Milan, but Jerzy Dudek, Liverpool FC's goalkeeper, correctly anticipated his strike and swatted it away for the save. Game over.

Relive the excitement of other legendary comebacks from FC Barcelona, AS Roma, and more of your favourite teams here.