After losing 4-1 in the first leg at FC Barcelona, AS Roma needed a small miracle in the next match at home to advance to the semi-finals for the first time since 1984. Here's how one of the best comebacks in football history unfolded.

It wasn't looking good for AS Roma before the second leg of the 2017-2018 UEFA Champions League quarter-final match against powerhouse FC Barcelona. After getting drubbed by Barça 4-1 in the first leg of the knockout phase at Camp Nou, including two mortifying own-goals and another goal given up after sloppy defensive play in the 87th minute, AS Roma faced the enormous challenge of defeating a squad that featured two of the world's best players: Lionel Messi and Andrés Iniesta. Not only that, but thanks to UEFA tournament rules that award victory to the team with more away goals if they're tied in aggregate after both knockout phase matches, AS Roma would have to outscore them by at least three goals if they wanted to advance to the next round. Simply put, AS Roma needed a small miracle.

Every AS Roma fan knew the club's work was cut out for them, but what they likely didn't know was that AS Roma's statistical probability of beating FC Barcelona by such a wide margin was a measly 1.6%. 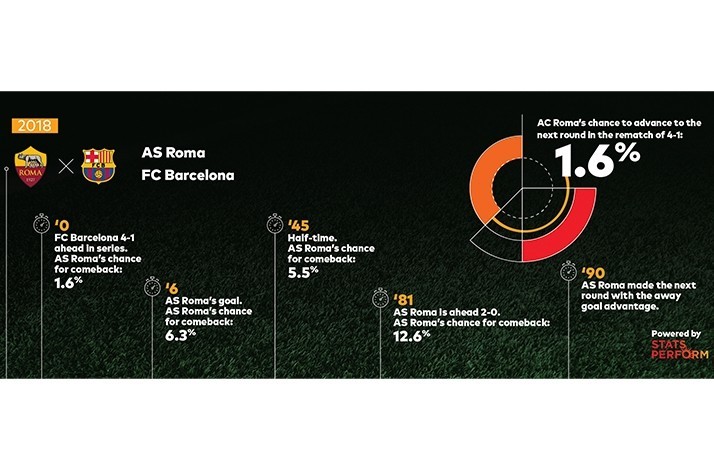 Still, AS Roma's players' hopes were high. The club hadn't advanced to the semi-finals in the tournament since 1984, and fans were hungry for a change—and a championship.

If the home team wanted to give the spectators at Stadio Olimpico any hope, they knew they'd need to notch an early goal to start building momentum. And that's exactly what they did. At the six-minute mark, Edin Dzeko got AS Roma on the board, upping their probability of advancing by nearly four times to 6.3%. By half-time, however, the probability dropped down to 5.5% by virtue of the score remaining 1-0. Then, at minute 58, Daniele de Rossi scored on a penalty to make it 2-0, elevating AS Roma's chances of advancing to 12.6% as the final 10 minutes of play approached.

And that's when it happened: at minute 82, defender Kostas Manolas scored an amazing header off a corner kick to make it 3-0, and 4-4 on aggregate. The final eight minutes of play saw AS Roma fend off a blistering attack by Barça and hold on for the victory, causing pandemonium to break out in the stands as frenzied fans cheered the incredible win.

Relive the excitement of other legendary comebacks from Liverpool FC, Tottenham FC, and more of your favourite teams here.