Tottenham Hotspur FC's comeback from 3-0 thanks to legendary strikers

In 2019, Spurs pulled off a remarkable comeback without their premier striker, Harry Kane, against an Ajax squad that beat them 1-0 in the first leg and and led 2-0 in the second leg after 50-plus minutes. It was all thanks to the heroics of another striker, Lucas Moura, who came through with a hat trick, including the spectacular series-clincher in extra time.

The flying kicks, the club colours, the deafening roar of the crowd when a final goal is scored. A passion for teams, tradition, and glory unites football fans across the globe. The peak of that passion might be the comeback: the moment when, against all odds, a beleaguered team brings home a victory. Great comebacks live on in sports history, marking the moments when fans witness miracles and players achieve their very best. These stories show us that when it comes to will, raw passion, and drive in football, statistical probabilities don't mean anything.

In the first leg in the U.K., Ajax eked out a 1-0 away victory, giving them confidence heading back home. To make matters worse for Tottenham Hotspur FC, their goal-machine striker, Kane, was unable to play the second leg, so Pochettino was forced to rely on Moura and the rest of the club to pick up the slack.

From the start of the next match, Ajax looked like the superior squad. In the fifth minute, they capitalized on a corner kick with a gorgeous header from de Ligt to go up 1-0. Tottenham Hotspur FC’s chance of coming back for a victory from this point in the match was just 13.6%. It wasn't looking good in the 35th minute when Ziyech added to Tottenham Hotspur FC’s woes with a deft kick past Lloris to give Ajax a 2-0 cushion, and 3-0 on aggregate. The team's probability of winning fell to 2.7%. 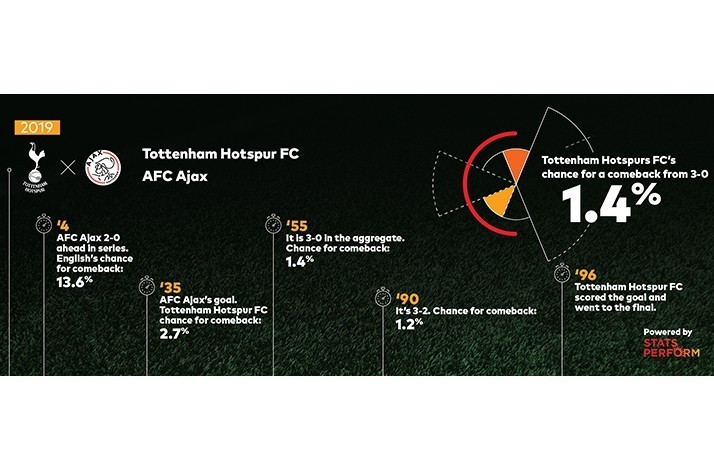 Without their biggest star, Moura decided it was time to step up in the second half, telling his team "the show is not over yet." In the 55th minute, with Tottenham Hotspur FC's winning probability dwindling down to 1.4%, he finally got his team a goal in the series with a strike off his left foot on a perfectly executed four-on-three breakaway. Then, just four minutes later, Moura struck again. Ajax's goalkeeper André Onana made two brilliant saves, but couldn't hold onto the ball. Moura regained control for Tottenham Hotspur FC, danced around two defenders, then lasered one past another two Ajax players to knot the match at 2-2.

Still, Ajax held a 3-2 lead in aggregate, and by the end of 90 minutes, Tottenham Hotspur FC held only a 1.2% probability of notching a go-ahead score in extra time to clinch a spot in the UEFA Champions League Final on away goals. They would have only six minutes to make magic, and after playing magnificently all day, it was none other than Lucas Moura who'd strike again. In minute 96, with under a minute to go, Tottenham Hotspur FC put together one last drive, and Ajax collapsed in a defensive breakdown. Moura got a feed from Dele Alli and struck one into the right corner off his left foot past Onana, lifting Tottenham Hotspur FC to their first-ever European Cup final and driving their fans wild with one of the best comebacks in football history. Yet again, proof that sheer will, and perhaps a bit of serendipity, can overcome overwhelming odds.

Relive the excitement of other legendary comebacks from Barcelona FC, AS Roma, and more of your favourite teams here.