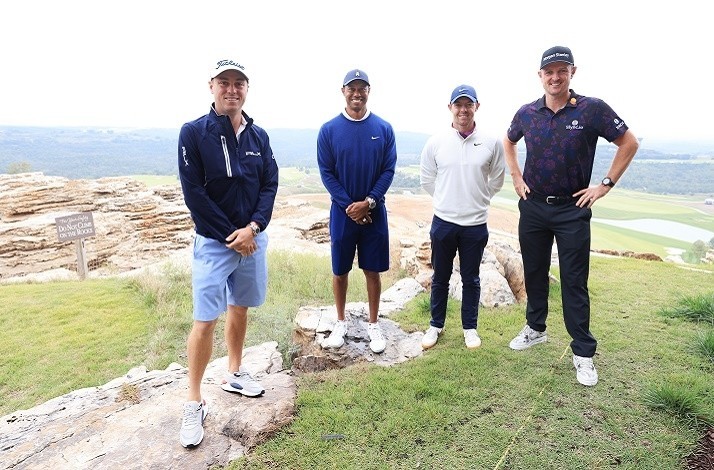 The 82-time PGA TOUR winner joined Justin Thomas to represent the American side against Rory McIlroy and Justin Rose for the Europeans. In an exclusive post-event press conference also made available to Mastercard® cardholders, the four discussed the day’s match, the course’s namesake, and the best way to appeal to golfers of all levels.

“Today was an incredible experience, and it was great to see some of Tiger’s handiwork and what he’s been up to,” said Rose, when asked about the course. “It was a fun and exciting day with totally the wrong result.”

“Any time we can all get together, it’s nice,” added McIlroy. “It’s a bit of a decompression after last week to come here and play a really enjoyable golf course.”

Thomas said that he was grateful to be able to spread some fun with fans around the world during these challenging times.

“It’s great to be able to bring a lot of joy to people at home,” Thomas said. “And anytime I can be a partner with Tiger Woods it’s going to be pretty cool and pretty fun.”

Located at Big Cedar Lodge in Ridgedale, Missouri, Payne’s Valley is the first public TGR Design golf course in the United States. It’s dedicated to legendary golfer and Missouri native Payne Stewart, who passed away in 1999.

“I was lucky to have been with Payne early in my career and experienced all different sides of him,” Woods said, recalling a memory from the 1999 US Open at Pinehurst, which Stewart won. “I was right there on the back of the 18th green when he made that winning putt—it was such a cool experience.”

Woods said that the course is designed to reflect Stewart’s playing style.

“Payne had the most rhythmic golf swing and flow and he always curved the ball, he loved moving the golf ball,” he explained. “Hopefully this course is a reflection of that.”

The Par 72 course is designed to accommodate golfers of all skill levels, from top-ranked pros to families looking for a fun day playing golf in one of the most picturesque spots in the Ozarks.

“The idea is to have movement and flow, and to not lose a golf ball,” Woods explained. “We want people to feel like they’re a part of nature, to have the sound and visuals, to hear the breeze in the trees.”

A Mastercard cardholder had the exciting chance to ask McIlroy if he thinks there’s a need to reign in the golf ball distance, or if he’s in favor of pushing the boundaries with technology and body conditioning. “It’s a tough one. I’ve always said that golf is more than anything else a game of skill,’ McIlroy shared. “I think we’re too far down the road to do something drastic…but some things can be done,” he added.

Before wrapping it up, another guest asked Woods whether, in ten years, he would prefer to win a US Open or have a US Open played on one of the courses he designed.

Woods answered with a big smile and one word: “Win.”