The renowned Spanish neoruralist, cheese artisan, and entrepreneur travelled the world to perfect his knowledge of making and aging cheese. Here, he shares a delicious new way to elevate a humble rice dish to gourmet status.

Many people have studied cheese. Some have built careers around it. Jose Luis Martín—a.k.a. Martín Afinador—has dedicated his life to it.

Martín's love affair with cheese dates back to the '80s, when he left a high-powered telecom job and bought a ranch in western Spain. There, without even electricity or running water, he began making cheese in the traditional way using milk from his own goats.

He practiced and studied for more than a decade, devouring every book on artisanal French cheese he could find. As his confidence increased, he started to think bigger, constructing an underground bioclimatic aging system he called "a house for cheese." It was here that Martín created Guadarranque cheese, which would go on to win several awards in the prestigious Feria Nacional del Queso de Trujillo.

In 1996, Martín travelled to France and Switzerland for further study, eventually launching a career as an educator and advisor to cheesemakers around the world. Since then, he's been instrumental in the creation of new kinds of cheese and has helped launch some of the most important cheese shops in Spain.

His passions come together at QAVA in Madrid's Retiro neighbourhood, a combination cheese factory, cellar, shop, tasting room, and café. There, the "maestro afinador de quesos" takes young cheeses and ripens them in different ways, resulting in a selection of both hard and soft varieties that rank among the world's finest.

While he ensures every detail at QAVA is perfect, he believes the success of a cheese begins in the pasture.

"A good cheese starts at the farm, not the factory," he explains. "It's the convergence of a lot of details."

With this creamy rice recipe, Martín hopes to highlight the different types of Spanish cheese that can raise a comfort-food staple to fine dining status. He recommends experimenting with any aged, hard cheese from Spain, whether it's cow, goat, sheep, or a blend. If you can't find Spanish cheese, aged cheddar, parmesan, two-year-old Comte or Gruyere, or two- to three-year-old Gouda are great alternatives. 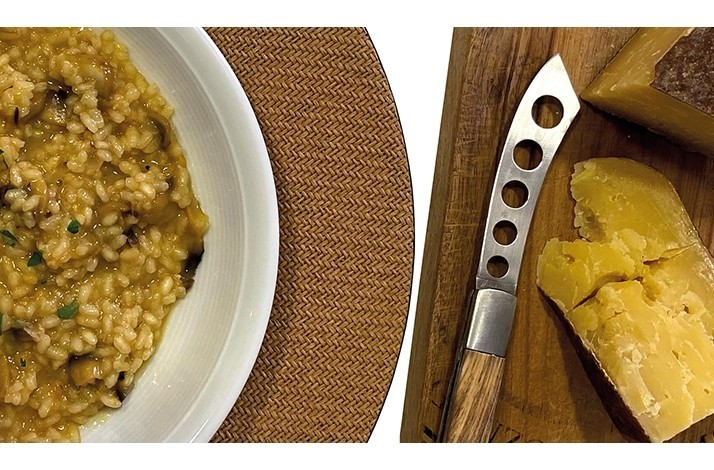