The acclaimed chef broke through culinary boundaries with his personalised take on high gastronomy, drawing inspiration from his native Spain and around the world. Here, he shares a delicious yet easy-to-make vegetarian eggplant dish perfect for the holidays.

When he began his career as a chef, Diego Guerrero made it his mission to learn everything he could from each restaurant he worked in, and there were many.

A native of Vitoria, the capital of Spain's Basque region, Guerrero honed his skills in some of the country's most acclaimed kitchens, from El Bulli to Goizeko Kabi to Martín Berasategui. His unflagging energy and attention to detail at Madrid's El Club Allard, where he cooked for 12 years, earned the restaurant its first two Michelin stars—and gave him the experience he needed to pursue his own culinary ambitions.

Guerrero did just that with the 2014 opening of DSTAgE, a high-concept restaurant that maintains a relaxing atmosphere—with industrial accents and an open kitchen—and an unfussy approach to haute cuisine. The constantly changing menu showcases his unique take on gastronomy, with dishes inspired by Spain, Mexico, Japan, and beyond.

DSTAgE represented the culmination of Guerrero's life's work, and everything clicked perfectly. It was soon awarded two Michelin stars of its own, underscoring the uplifting philosophy embodied by its name, an acronym for "days to smell, taste, amaze, grow, and enjoy."

In this exclusive recipe, which elevates the humble aubergine (eggplant) to gourmet status, Guerrero incorporates unique flavours such as tahini, soy, thyme, and almonds to give it a festive profile.

"Aubergine with sesame and almonds is a perfect recipe for Christmas, when we are used to cooking turkey, lamb, and fish dishes such as sea bream," he explains. "It's a fresh, tasty dish with sweet and aromatic touches, where the marinating and toasting processes are very important to achieve maximum flavour."

And just because Guerrero has multiple Michelin stars, that doesn't mean you'll need his skills to achieve good results.

"I chose this recipe because it is relatively simple and an advanced level of cooking is not necessary," he says. "I hope you like it and your guests are delighted." 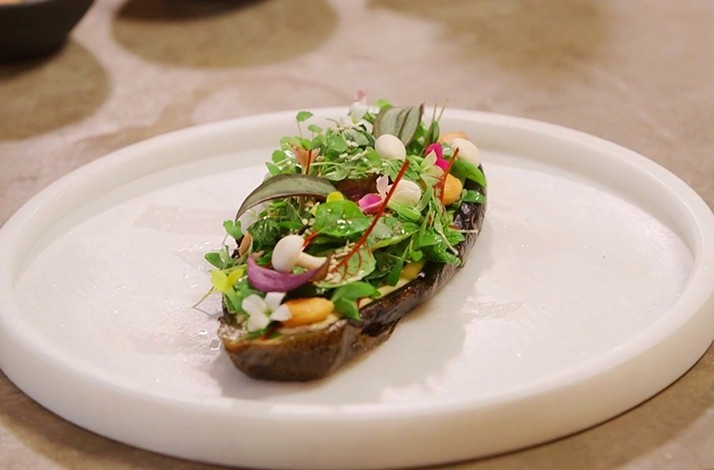 Roast the aubergine, both sides, in the grill, leaving the skin crunchy but not scorched (you can use an oven with grill as an alternative). Cover the pulp side with the hot sesame cream and decorate it with the sprouts (previously seasoned with the thyme oil). Add 5 shimeji heads and 6-7 roasted almonds.