Discover what led Patricia Tsai to ditch an accounting career for making chocolate in the traditional Mayan and Aztec method, and learn how her company, ChocoVivo, gets creative with dark chocolate.

Patricia Tsai found herself in need of a change in the early 2000s. She had pursued a corporate accounting career to please her parents, but in her mid-20s, she was already feeling burnout. To recharge and help her plan her next move, she took a food-centric soul-searching trip to Mexico to figure out what she was passionate about.

Tsai found herself at a chocolate production facility, where the aromas captivated her senses as she stood watching local producers breaking it down in large grinding stalls. By the end of the trip, she realized that her true passions were people and food, and with newfound motivation, she decided to bring Mexican chocolate back to LA for her next venture.

That's how ChocoVivo began back in 2001, and nearly two decades later, Tsai has taken her brand a long way. What started out at farmers' markets on LA's Westside for a decade is now a strong online operation and beloved community staple, with an alluring brick-and-mortar business in Culver City. Locals are particularly fond of ChocoVivo's unique offerings, from private parties and in-depth demos to the soul-soothing sipping chocolate and dippable churros.

Tsai wanted the shop to give her customers the same kind of transformative chocolate experience she had in Mexico, so guests can stop in and see it being freshly made and learn all about the sustainable bean-to-bar journey in full transparency.

"People trust our brand and know that we continue to provide transparency and sustainability in all that we do," Tsai says.

That transparency is exhibited in Tsai's openness about ChocoVivo's stone-ground chocolate production methods, which date back to ancient Mexican cultures. She also shuns the use of milk powder, soy lecithin, and additional cacao butter, so ChocoVivo only makes dark chocolate. This results in ChocoVivo chocolate having more nutritional value than your average bar. 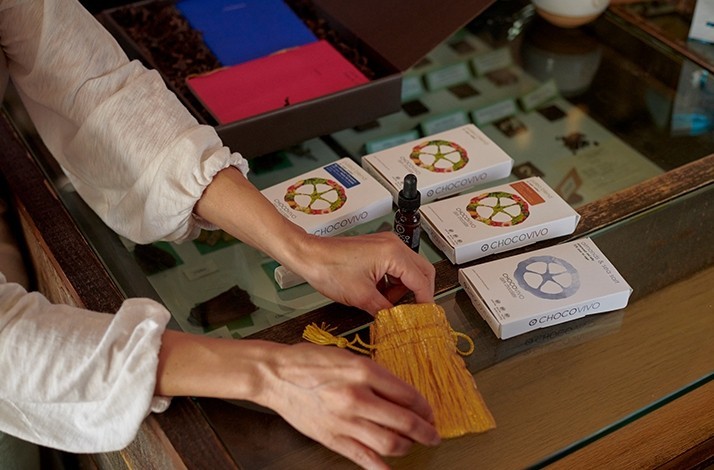 Owing to the traditional production practices, ChocoVivo's bars don't have the glossy look of mass-produced products, which is exactly the point. Tsai never wanted her customers to consider ChocoVivo chocolate to be a "confection" or "candy," but rather a food that provides sustenance.

"What motivates me is being able to tell the story of chocolate through my lens, which is more than just a chocolate bar," Tsai says. "From the use of chocolate in a cacao ceremony, skin care, savory dishes, drinking, or just using a cacao bean as a chocolate colored pencil, there's just so many uses of chocolate that I discover, which fuels my creativity."

Tsai has even developed a chocolate skin care brand called ChocoPaloma, which features products like chocolate and rose body and hair oil, and other unisex, cacao-based beauty products like its Sun Stick and Wonder Balm.

Her ultimate goal is to get a ChocoVivo bar into the hands of people everywhere, while also sharing her story and Mexican chocolate traditions.

"Chocolate is universally loved by people around the world," Tsai says. "At ChocoVivo, we strive to teach chocolate to kids of all ages, from preschool to college kids. The language of chocolate brings people together in many different ways."

At a time when unity is more important than ever, we couldn't find a better reason to share some ChocoVivo with the people we love.