With Huvudsta Trädgård, her newly launched no-dig garden in Stockholm, food consultant Elin Aronsen Beis uses discarded plant matter to grow high-quality organic produce for restaurants and households. Now, with a successful first season in the books, she discusses how this longtime dream became a reality and shares tips for those looking to start zero-waste plots of their own.

As a food consultant, Elin Aronsen Beis has long known how much of a problem food waste can be for households, restaurants, and the environment. The specialist in waste reduction and zero-waste kitchens has devoted her career to finding creative solutions, which is why she was so excited to turn one of her biggest ideas into a reality earlier this year.

Huvudsta Trädgård is an experimental no-dig garden in Stockholm designed to close the loop on waste by using 65 tons of surplus or misfits of vegetables from a big farmer — such as lettuce and herbs in pots or broken bags of soil that could not be sold at retail — and other discarded plant matter to grow high-quality produce. Launched by Beis in March of 2020, the garden quickly became a veritable jungle, with the capacity to supply restaurant chefs and consumers with high-quality locally grown produce. 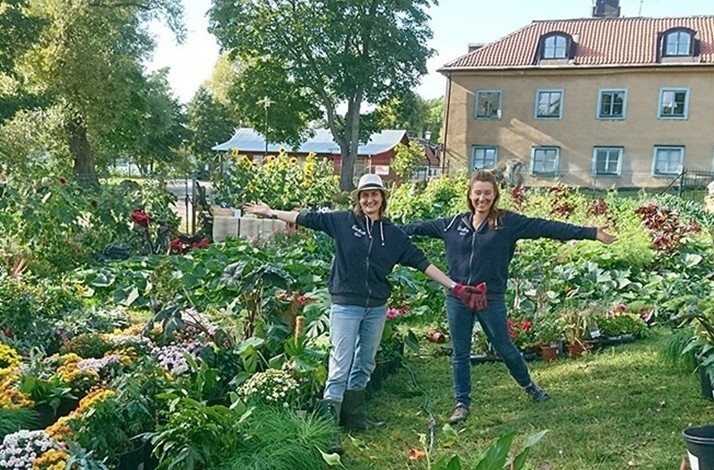 One of those chefs, Paul Svensson, is such a fan of the garden that he's using it as a setting for two virtual lessons, one on pickling and one on zero-waste cooking.

For Beis, the garden is at once the fulfillment of a dream and the beginning of a long-term experiment in low-impact food production. It all began with an emailed request to become a garden volunteer at Hufvudsta Gård, an upscale conference center.

"I was forwarded to the real estate owner, who asked me what I would do with 700 square meters of land," she says. "I'd build a garden, of course. But would I have time to manage a garden that size while doing my job as a consultant in sustainable food?"

The answer came quickly, as the coronavirus pandemic closed restaurants and much of Beis's business dried up. Not only was her time freed up, but she also had plenty of volunteers looking for safe, outdoor work to do while their regular lives were on hold.

"Suddenly I was a full-time gardener with no education in gardening and no real resources," she explains. "But with a crystal-clear plan to make it not only a food-producing garden but a garden built on waste and a zero-waste vision."

Thanks to a small army of helpers, Beis accomplished her goals for the garden's first year in just months and began working on her second-year goals during the summer. The result is a successful garden that produces fresh, organic produce and flowers as well as honey from an on-site beekeeping project. Its benefits extend beyond the garden beds themselves, as repurposed organic waste can sometimes be used in creative ways.

"We rescued, for example, hundreds of plants from a flower company that were going to become waste and took care of them in our garden," she says. The flowers were nursed back to health by team members Sonia Le Masne and Ann Beis and delivered to Västerås Konserthus (a concert hall outside Stockholm) to beautify empty seats during coronavirus-restricted concerts.

Beis hopes that her example provides inspiration to others thinking of starting their own no-waste gardens. Her advice is to ask around and get help anywhere it's available: ask your local municipality about unused land, and seek out volunteers and businesses that want to help.

"Look for local companies that could have (organic) waste of some kind that could be used as a resource, because their garbage could be your garden gold," she suggests. "And get yourself to Google and YouTube, where there are tons of ideas, techniques, and know-how."

Beis says that of all the lessons her first year as an organic farmer taught her, one stands out clearly.

"The respect I had for real farmers was already there, but it's even bigger now because I realise how much hard work there is behind every sweet tomato you find in the supermarket," she says. "Food is very precious."