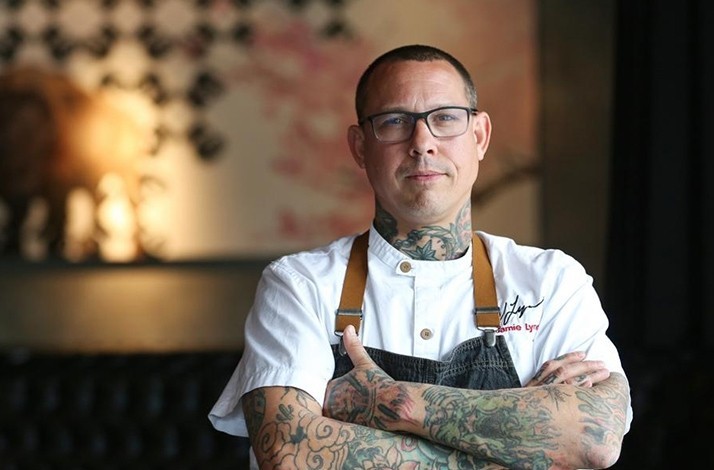 Home chefs were treated to a lesson in French fine dining with an American twist as chef, restauranteur, and Top Chef: All Star contestant Jamie Lynch demonstrated his beloved whiskey-brined duck breast during a virtual cooking class made possible through Mastercard’s partnership with ChefsFeed.

A tasty tribute to celebrity chef and restaurateur Jamie Lynch’s background in upscale kitchens like Le Cirque 2000, Aureole, and Café Boulud, this delightfully decadent recipe is the ultimate treat for date night at home.

During the hour-long livestream, Lynch combined the duck breast with two complementary components: Pommes Anna, a classic French side dish of crispy sliced potatoes, and a perfectly creamy and emulsified Époisses cheese sauce.

As for the duck, it all starts with the brine.

“When I brine meat it serves two purposes, to add flavor and to retain moisture,” he explains. “In my restaurants we brine pork, chicken, duck, and sometimes fish, because all of those meats are low fat and don’t have a ton of marbling.”

In its most basic form, a brine is a salt solution. Lynch makes his more flavorful with Hondashi Japanese soup stock (with smoked and dried bonito), slivered ginger, fresh bay leaves, garlic, and the stems of a half bunch of cilantro. Why stems?

“In applications where I’m not eating the herb, I like to use the stem because it has a lot more flavor than the leaves,” Lynch says. “I give them a fine matchstick cut.”

He then added his special ingredient, about a cup of bourbon whiskey, and put the brine on the stove.

“You don’t have to boil the brine, you just want to heat it to the point where the essential oils of the herbs release and the salt dissolves,” he says. “Once that happens you can cool it down.”

Preparing the duck breast means making sure the flavors can make their way through it. To do this, Lynch scored the skin side of the breasts in a crosshatch pattern.

“This will allow the brine to penetrate the meat,” Lynch explains. “When we cook it, the fat will render from the skin and allow the skin to become very crispy.”

The brining process should take about four to six hours for individual portions of meat. Too long and it will become overly salty and even begin to cure.

“While they’re brining, I’ll get started with the Pommes Anna, which is a traditional French crispy potato pinwheel,” he says. “It’s super easy to do and I use this wide muffin pan to bake them in.”

Lynch began by trimming a russet potato into a cylinder and slicing it into thin potato “coins” using a Japanese mandolin slicer, though a sharp knife also works. He then arranged the coins in a two-layer, overlapping pinwheel design, adding salt, thyme leaves, and clarified butter before baking them in the oven at 300 degrees Fahrenheit for 20-25 minutes.

“Don’t rinse the potatoes,” he cautions. “The starches help keep it in one piece.” 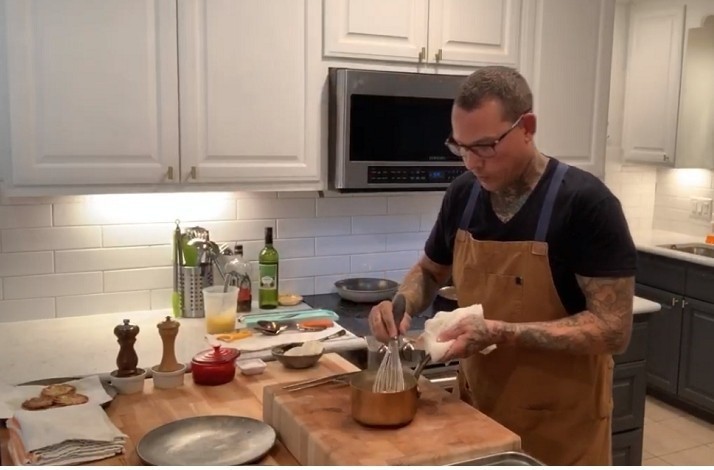 The final element is the Époisses cheese sauce, which starts by boiling chicken bone broth, Dijon mustard, lemon zest, and thyme and reducing it by half.

“After about 10 minutes, we’ll whisk in the cheese,” he says.

Traditionally served medium rare, the duck breast cooks quickly, so stay nearby. Lynch recommends placing them skin-side down in a cold pan before putting it on the burner.

“When it starts coming up from cold to hot, it allows the fat in the skin to start to melt and render before the crispy layer of skin develops,” he says. “That’s the trick to getting delicious duck breast.”

Using a spoon, he basted the breasts with rendered fat until the skin was crispy, flipped them, and cooked them for another 30 seconds before removing them to rest on a wire rack.

And with that, it was time for plating. Lynch sliced the breasts on a bias into thin strips and served them atop a dollop of Époisses sauce with the pommes anna delicately resting at its side. As an added vegetable, he steamed broccoli florets, finished them in the pan that previously cooked the duck breasts, and placed them amid the slices. A little black pepper, Maldon sea salt, and a few ribbons of cilantro leaves and the masterpiece was ready to enjoy.

Try it yourself for your next special occasion at home with the recipe below. You just might find that you don’t need to go out to indulge in a delicious, French-inspired gourmet meal.

When you purchase your ingredients for this recipe, you can help support Stand Up To Cancer®. Mastercard will donate one cent, up to $5,000,000, to Stand Up To Cancer, every time you order online or tap in-store at qualifying grocery stores from April 1 to August 31, 2021.*

*For every online or contactless transaction made and reported at or from qualifying restaurants and grocery stores (as defined by the applicable Mastercard Merchant Category Code) with a U.S. issued Mastercard, Mastercard will donate one cent (US$1), up to US$5MM to Stand Up To Cancer (“SU2C”). Applies 4/1/2021 12:00am ET – 8/31/2021 11:59pm ET or when US$5MM donation max is reached, whichever comes first. If otherwise qualifying contactless and Mastercard Merchant Category Code transaction is not so classified and reported by a third party, transaction will not count as a qualifying transaction and will not result in a donation to SU2C. Debit PIN and Int’l transactions ineligible. SU2C is a division of the Entertainment Industry Foundation. Mastercard is a registered trademark, and Start Something Priceless and the circles design are trademarks, of Mastercard International Incorporated. ©2021 Mastercard. See full terms at mastercard.us/SU2C.