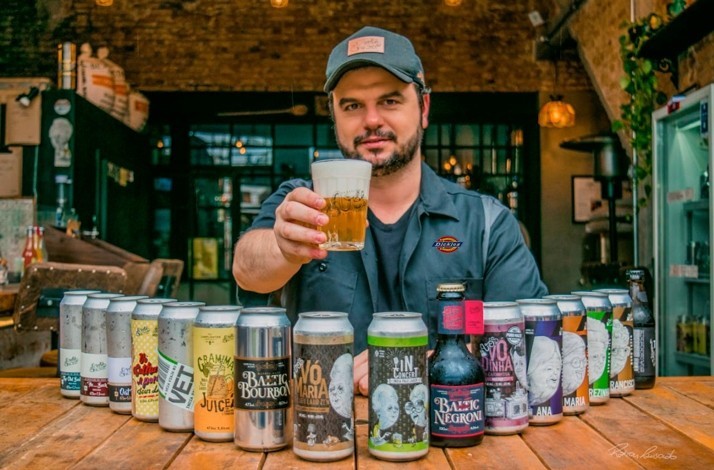 Explore a variety of hoppy topics, such as beer ingredients, how to run a brewery, and different brewing styles you can try out from the comfort of your own home. Plus, you’ll get a downloadable magazine detailing the vast world of craft beer, its curiosities, terminology, and complexities.

The decision to quit a cushy job in advertising and embark on a new career based on a creative hobby could be too risky a pursuit for most. But that is exactly what Junior Bottura did four years ago when he left the traditional office for a new kind of workplace: the craft brewery.

Thus far into his journey, Bottura and his Casa Avós Cervejaria Artesanal (translated as “Grandparents’ House Craft Brewery”) in São Paulo have already earned accolades for his elevated, one-of-a-kind creations inspired by the simple American lager. He’s traveled the world serving on beer festival panels and collaborating on handcrafted beer productions with top brands. Now, he’s sharing his passion and wisdom in a series of free virtual lessons aimed at inspiring beer enthusiasts to venture further into the vast world of craft beer from the comfort of their own couches.

He’ll start by teaching the fundamentals of craft beer, starting with a discussion on the main ingredients: grains, hops, yeast, and water. From there, Bottura will take you through what it’s like to run a beer production factory, and how exactly to do it, before delving into more colorful avenues of the industry and its nuances. For beer connoisseurs who were always drawn to the craft of brewing, Bottura will serve as true inspiration, especially if you’ve always wanted to try your hand at doing it yourself.

As Bottura says, "For me, the biggest challenge is how to be creative in a market that, in a way, is new." With that in mind, he’ll explore the possibilities that can be revealed based on different brewing processes, from the effect of different grains and hops on beer’s flavor and aroma, to the impact of using top-fermenting ale yeast versus his preferred choice of bottom-fermenting lager yeast. After all, this is coming from a master brewer who had his “Cerveja Avós and Difford’s Guide Barrel Aged Baltic Porter Negroni” named one of 2019’s Top 5 Beers by by Stan Hieronymus' Critic's List in Craft Beer and Brewing. The acclaimed drink is made by brewing Baltic porter in small batches inside American oak barrels once used to hold the famed Italian cocktail.

To accompany the five videos Bottura is releasing, he’s also created an e-magazine diving into the curiosities and complexities of craft beer. Offered in English, Spanish, and Portuguese, the publication includes a guide to Brazil’s best craft breweries and a glossary of terms that any aspiring brewer should know, like growler, IPA, APA, and drinkability.

For any beer aficionados looking to take up a new hobby while staying home, this is the ideal catalyst to strike up some inspiration.

"Is it a difficult time? Yes, but it's hard for everyone. So, I won't complain,” says the brewmaster, who had to temporarily close his bar and pivot to delivery in the interim. “Only criticizing doesn't get us anywhere. We are all in the same boat, and those with more energy who look forward will, for sure, come out of this moment stronger."