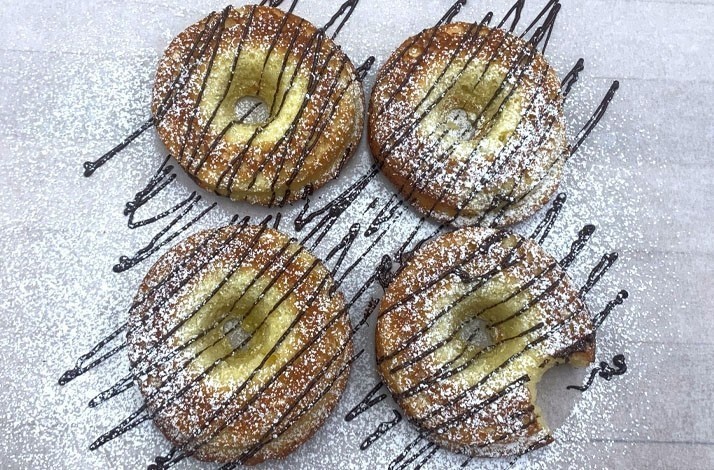 Take a digital doughnut-making class and follow along as a revered family recipe is shared and prepared before your eyes.

The Philly Fluff was an old-time NYC snack sensation: a play on pound cake featuring cream cheese and chocolate that was groundbreaking for its time. These days, it only exists in doughnut form at Dough Doughnuts—and, after this class, in your home for future family celebrations.

The best culinary creations are often updated takes on classics, and the Philly Fluff at Dough Doughnuts has been revamped not once but twice in its illustrious and tasty history.

The story began decades back, when a man named Harry Zipes ran bakeries across New York City and Long Island. While Zipes was an enterprising businessperson, he was also an avid baker who loved to experiment. One day, he decided to tweak a traditional pound cake recipe, adding cream cheese and melted chocolate to the mix. The result was a creamy, tangy, and fluffy dessert that was dubbed the “Philly Fluff.” This play on pound cake became a staple of Harry’s bakeries and an iconic treat across NYC and the Island.

Fast-forward to today, and Harry’s son has followed in the family footsteps as one of Dough Doughnuts’ co-owners. One day last summer, he was chatting with the culinary director, Bethany, when he started reminiscing about the legendary Philly Fluff. Bethany was in the process of testing new cake doughnut recipes, and when she heard the description of this decadent cake, she was inspired to turn the recipe into a doughnut. After some experimenting in the kitchen, the Philly Fluff was reborn—this time, with a hole in the middle.

Now, you’ll be able to join Bethany in a virtual class as she shares a printable recipe card and shows you exactly how to prepare this delectable cake doughnut. By the end of the class, you’ll be sinking your teeth into your own Philly Fluffs.

Even while its usual customers are at home, Dough Doughnuts is proud to serve its communities through Frontline Sweet Support, which provides free coffee and doughnut break stations to hospital workers fighting the pandemic throughout the tristate area.

Thank you to everyone who used their Mastercard to order online or tap in store at grocery stores for their ingredients. We have reached our donation goal and will be donating $5,000,000 to Stand Up To Cancer to help fund groundbreaking cancer research programs. Together, we can Start Something Priceless™.*