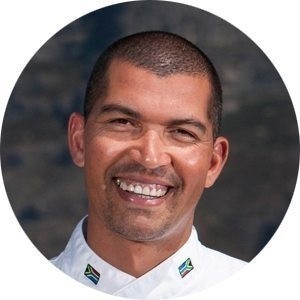 Reuben Riffel is a chef well-known for his food-focused television shows and philanthropic work. Reuben began his culinary career in Franschhoek at Monneaux restaurant, establishing it as one of top 10 restaurants in South Africa. Over the years he has won a number of awards including Chef of the Year and Eat Out's Restaurant of the Year.

Reuben's Restaurant (his own brand) opened in 2004, after Reuben spent 2 years in the UK and Reuben's in Franschhoek was ranked as one of South Africa's Top 10 restaurants for 3 consecutive years. The Reuben's Restaurant brand is still going strong after 16 years.

Reuben has also published 3 bestselling cookbooks. He was a judge on MasterChef South Africa and hosted or participated in other local reality TV food shows.