The former advertising graphic designer dedicates himself to the art of making the world's most luxurious paper by hand. In his country-house workshop, he creates paper that seems ready to tell a story—along with engravings that drip with vibrant life.

The papermaking techniques of the past live on today in Lecce, Italy, thanks to the ambitions of artist Andrea De Simeis.

One of just a handful of artisanal papermakers and engravers in the world, his arrival at this singular vocation came via a circuitous path. Armed with a fine arts degree in painting, De Simeis began his professional career as an advertising graphic designer, helping companies and brands tell their stories. But through his longtime passion for travel, he found himself inspired by the artists and craftsmen of past centuries. And as an artist himself, he decided that industrially produced paper didn't meet his unique creative needs. 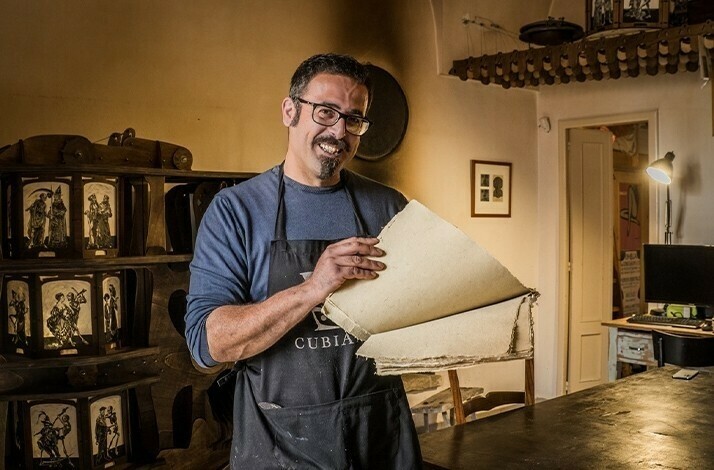 This led him to discover his true calling. He studied the papermaking techniques of 7th-century Asia and 14th-century Italy, then combined the two to create paper with an unparalleled look and feel.

The results of his passion can be seen in his charming country-house studio in the small town of Caprarica di Lecce, which he introduces to Mastercard cardholders in this unique video tour. Not only will you see the workshop where he creates each individual page by hand, but you'll also see the garden where he grows the plants that provide pulp for the paper, as well as the colours that form the basis of the natural inks he uses for engraving.

Among his biggest challenges in adapting Asian papermaking techniques to Italy was finding local plants that would work well.

"I did a comparison study between the botanical species of the Far East and the Mediterranean," he says. "Then we identified the most ancient plants and techniques that made the best paper."

His breakthrough came when he discovered that the fibre of the Ficus carica, or common fig, had many of the same characteristics as the Korean mulberry—the plant used to make traditional handmade Japanese paper called washi. Since figs are common throughout the Mediterranean, he knew he hit upon an abundant—and renewable—source of raw material.

After "translating the techniques to the botanical heritage of the Mediterranean," De Simeis got to work. As he demonstrates in the video, it's a labourious, time-consuming process, yet every step is crucial to the final product.

It begins with extracting the pure cellulose white lining from the plant needed to make paper—not an easy task—then bleaching the fibre with water, burnt wood ash, and rosemary. Then comes the fun part.

"Afterward, we beat the fibres with a hammer to reduce it to a paste, which is then put into the vat to make the first sheets of paper," he explains.

Following a few more steps, sheets of paper are lifted out of the solution, squeezed to remove excess moisture, and hung to dry on hemp cloth. The result is something De Simeis is justifiably proud of.

Visit priceless.com for priceless experiences in art, cuisine, entertainment, and more in Italy and around the world.