The up-and-coming filmmakers of Berlinale Talents are showcasing sustainability

Since 2003, the Berlinale has brought together emerging filmmakers from more than 70 countries to share their stories, network, and get advice from industry experts. The recent Berlinale Talents Circles event shone a light on the latest projects supported by the Mastercard Enablement Programme, which all revolve around sustainability in film and beyond.

At its best, film is so much more than a medium for entertainment. It can be a catalyst for positive change, as filmmakers connect with viewers to share ideas about how to make the world a better place to live and work.

It was with this idea in mind that the renowned Berlin International Film Festival launched Berlinale Talents 18 years ago. An international forum for up-and-coming filmmakers, fondly nicknamed "the Talents," it connects people from different professions, like directors, actors, screenwriters, sound designers, producers, and composers with mentorship and funding to help them bring their projects to life.

As a co-partner of Berlinale Talents, Mastercard introduced the Mastercard Enablement Programme in 2020, a chance for filmmakers to apply to receive financial support and coaching with projects revolving around sustainability. The response was nothing less than inspiring. Representing a wide range of backgrounds and interests, the three winners—chosen by a jury that included German filmmaker Wim Wenders as its president—worked diligently over the next 12 months to bring their global visions for cinema to reality.

Their work was among the highlights of the 19th edition of Berlinale Talents in March 2021. The virtual event brought together 205 filmmakers to network, exchange ideas, and get motivated through lectures, roundtables, and breakout conversations.

"Leave your Talents Footprint!" was the motto of the kickoff event on the third day, where last year's winners, Sydelle Willow Smith and Diego Sarmiento, reported on how Mastercard's support boosted their initiatives and helped them achieve their cinema goals. 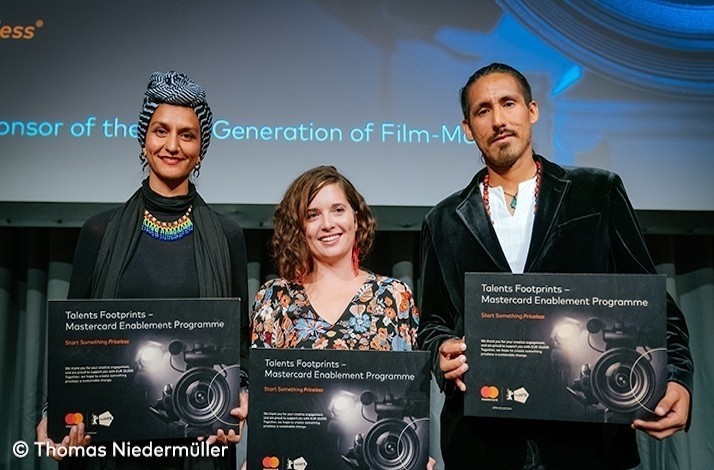 In one breakout room, Cape Town, South Africa-based Smith presented her project "Sunshine Cinema." As filmmakers from around the world listened in, she described how her team now facilitates solar-powered cinema in four African countries, mostly in rural areas that otherwise have no cultural meeting places. The organisation employs rural youth as Sunbox Ambassadors to prepare the film experience onsite, promote upcoming events on social media, and then report on them. An inspiring success story, Sunshine Cinema also uses virtual reality to provide sexual health education and combat the spread of HIV.

In another room, award-winning documentarian Sarmiento discussed his films focusing on Peruvian farmers' struggle for survival amidst the progressive destruction of the environment, particularly in the Andes region. The Mastercard Enablement Programme made it possible for his work to be shared with the rural population, with screenings in village schools and gathering places. Garnering widespread acclaim, his "Seeds Project" has strengthened people's awareness of their rights and of the great potential of sustainable agriculture.

In addition to last year's winners, the up-and-coming filmmakers in attendance were also invited to join in casual conversations with a variety of industry luminaries. Pablo Alvarez Mesa, a former Berlinale Talents participant, for example, answered questions about his new film Bicentenario. Made on the occasion of the 200th anniversary of Simón Bolívar's liberation march through Colombia, it shows how the memory of the 19th-century revolutionary and reformer is kept alive.

Participants were also treated to the wisdom of producer and director Berni Goldblat. A long-time resident of Burkina Faso, his project "Ciné Guimbi" is currently transforming a former cinema in the country into a dazzling new community entertainment space with two theatres, a meeting room, a bar, a restaurant, and offices.

Berlinale Talents is the forum for filmmakers of the future, and Mastercard is proud to help them make a positive, lasting change in the world. With talents like these, the cinema world of tomorrow is looking very bright indeed.