Enjoy Bahia through the digital universe, from home

Alex Atala, a world-renowned Brazilian chef, hosts a web series introducing us to the magic Trancoso district through encounters with artists and local personalities. Join the workshops led by our Mastercard summer ambassadors in Trancoso.

International award-winning chef Alex Atala dives into the history and culture of the Northeast of his native Brazil, in a web series created in partnership with Mastercard. Head of the D.O.M.'s kitchen, ranked among the world’s best restaurants by British magazine "Restaurant," Atala shares with us the culture and energy of Trancoso district, in Bahia, you can enjoy from the comfort of your home.

The chef, who also runs Dalva e Dito, is known for promoting Brazilian ingredients, using them in superbly creative ways. Throughout the web series, he lets curiosity emerge in four episodes, as he learns from artists and regional personalities who symbolize the essence of Bahia. 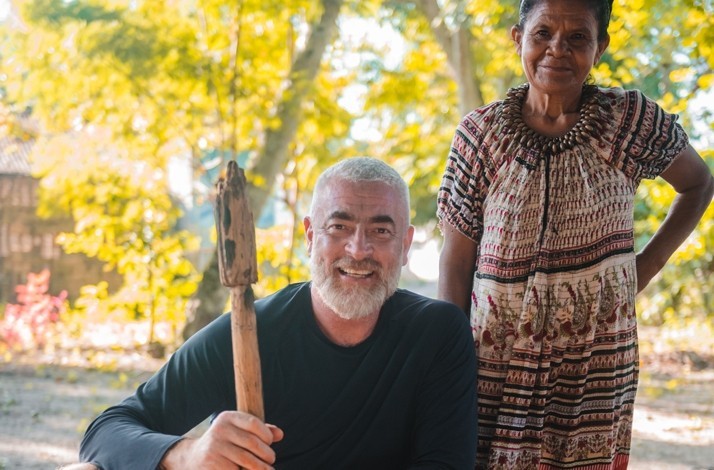 And how to talk about Bahia and Alex Atala without walking through the gastronomy? Atala takes into the kitchen of the Daughters of Glória, showing how special a feijoada, one of the main dishes of Brazilian cuisine, can be. Always willing to learn, Atala, who sees gastronomy as a way of connecting people, learns a different way of making farofa with bananas, which is, of course, shared with the viewers.

While cooking, Atala, who has already eaten in the best restaurants in the world, also delights and learns a new way of making moqueca, with barely a few onions, from the Pataxós, a significant population from the Bahian coast. But he dives even deeper when he explores with us the power of natural foods in his conversations with Aart, Trancoso´s king of fruits, devoted to teaching local communities how to plant and create incomes with harvested products.

In the episode on traditions, and not to lose his focus on his origins, Atala immerses into the culture of the Pataxós indigenous people. In addition to participating in indigenous rituals, the chef presents an important Brazilian custom when taking an herbal bath, and is impressed by the origins of the masts made by Valquito Lima and the flags painted by Damião Vieira; icons Bahians use in local festivities. He also explores the universe of Zé da Cerâmica to learn about his pottery’s history and technique.

It is also with Zé da Cerâmica that Atala talks about art, another theme addressed in the web series. The chef learns to mold pottery and discovers ‘how every detail of this fascinating place inspires an art that transcends Trancoso to reach the world,’ as well as the works of Valquito, Damian, and the Pataxós.

Another episode in which the chef shows the beauties of Bahia is about nature, ‘the most generous thing we have on the planet,’ Atala says. As he shows, nature gives us food, gives us moments of contemplation, and the herbs and other plants that take care of our health.

In addition to the content hosted by chef Atala, you can learn even more about the charms and riches of Bahia by joining our digital workshops in our social media to be seen and enjoyed anywhere. Our workshops are guided by our brand ambassadors, each internationally renowned for their work.

Zé da Cerâmica, Damião Vieira, and the Daughters of Glória will teach you to shape pieces, to paint flags and mast, and to prepare an herbal bath to renew energies, in total connection with nature and present times.

Seek energies, experiment, explore, participate, enjoy... Let yourself be taken by Alex Atala and our ambassadors through these digital contents created by Mastercard to show you what Bahia, and Brazil, have best to offer. Check it out!