How L.A.'s most beloved children's theater is sharing joy during the pandemic

Forced to temporarily suspend live performances, the Bob Baker Marionette Theater has gone digital and discovered an even wider audience. Kids around the world now have access to a wealth of interactive puppetry content from the oldest children's theater in L.A., from podcasts and playlists to shows of all kinds.

In a world where technology has permeated nearly every facet of the entertainment industry, there's something warmly reassuring about puppetry. From handmade puppets that could double as works of art to highly skilled puppeteers who give them such humanlike movements, each show is a childhood fantasy come to life.

That's why the Bob Baker Marionette Theater has been an enduring part of the Los Angeles creative landscape for nearly six decades. And when the COVID-19 pandemic forced the theater to suspend performances for in-person audiences in March, it didn't miss a beat. Within weeks, it had launched its At Home Happiness initiative, a series of virtual events and workshops that kids of all ages can enjoy wherever they are.

From recorded performances and downloadable coloring books to music playlists, podcasts, and puppet-making classes, fans can find plenty to keep them busy until the theater opens its doors again.

Located near Downtown Los Angeles, the puppet theater began as a scenery painting shop before veteran puppeteer Bob Baker and his business partner, Alton Wood, took it over in 1963. Baker had been performing his marionettes since the late 1930s. Prior to opening the theater, he had done window art for Los Angeles department stores, made displays for Disneyland's Main Street when the park first opened, and performed traveling shows all across Southern California.

In fact, most Americans have probably seen a Baker marionette without even knowing it. Not only did Baker and his team fabricate marionettes that were sold at Disneyland for decades, but they also worked on film and television productions, including Bewitched, Star Trek, Land of the Giants, Disney's Bedknobs and Broomsticks, and Close Encounters of the Third Kind. Most recently, they've done custom commissions for Lil Nas X and Harry Styles.

While contemporary collaborations with musicians and movies keep the theater busy, there's a steady stream of inspiration from projects Baker left unfinished. The prolific artist created more than 2,000 marionettes in his lifetime, each with its own song, movement, and act.

When Baker passed away in 2014, he left behind a lifetime's worth of work—a collection that lives on, according to Winona Bechtle, Director of Development & Community Partnerships.

"We could spend many years simply finishing some of the projects he started," they say. "These days we look to our historic body of work for inspiration but are always brainstorming new and diverse stories we can create in the coming years." 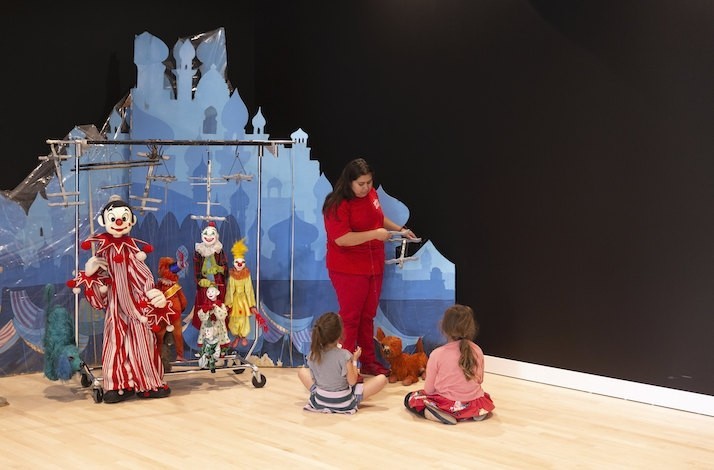 For now, the theater is focused on connecting with audiences where they are through At Home Happiness.

"We feel very strongly that happiness is such an important thing to remember, not only for kids but for our older adult fans as well," Bechtle says. "With our At Home Happiness videos and Zoom puppet shows, a kid might run to their kitchen and grab a paper towel roll and get inspired to build their own puppet at home. If people are discovering new ways to use their imagination, then we're doing our job!"

Driven by this mission to spark wonder in fans who can't attend live shows, the program has expanded far beyond the city limits—giving the theater even greater reach in the future.

"COVID-19 has certainly thrown us a curveball, but the upside to all of this is that we have greatly expanded our digital offerings," Bechtle explains. "We found that the reach of the magic of Bob Baker extends far outside of Los Angeles, and even when we are able to get back to regular programming in person we are excited for the future to include a wider audience that might not be able to attend a Bob Baker show if they don't live nearby."

Until then, live puppetry might still be a possibility for some. The theater is looking to ramp up its historic traveling company so it can safely perform outdoors until it's able to open up its space again.