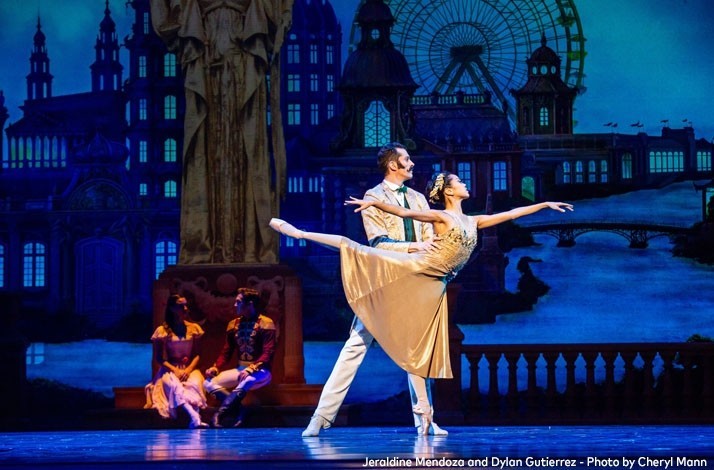 We asked Dylan and Jeraldine to share the music they listen to for inspiration and confidence before a big show. The duo responded with their own Spotify playlist that ranges from upbeat Drake songs to relaxing tunes from Tame Impala:

Here’s what Dylan has to say about their playlist, “This is all new music we’ve either discovered or has come out recently and it's been helping us with our daily moods during self-isolation. The music by Drake” — Dark Lane Demo Tapes — “is definitely in line with what I would listen to before curtain and after a show. It pumps me up and gives me confidence.”

Dylan also shares some lighter selections from the two dancers’ quiet moments at home. “The Lewis Ofman song “Yo Bene” is more in line with what Jeraldine and I listen to on weekends or on vacation when we are just vibing out. Tame Impala’s Slow Rush  is played during commutes to the theater and in the dressing room.”

It’s not surprising that life’s soundtrack is important for these two artists. “Music was big in my household growing up, so I always have it on and what I listen to always depends on my mood and surroundings,” says Dylan.

If you’re looking to relax and binge-watch a few shows, Dylan and Jeraldine have you covered with their eclectic streaming watchlist:

•   The Childhood of a Leader on Hulu

Jeraldine sees the couple’s streaming watchlist as a reflection of their changing moods during a time of social distancing. “This list of TV and movies is what we are streaming during self-isolation. Some of it is an escape to Los Angeles for us, with shows like Vanderpump Rules, Insecure, and Dave. Others like Devs, The Last Dance, and Mrs. America are our evening viewing when we have finished our daily exercise and classes and have poured ourselves a glass of wine or a spritz.”

“Entertainment is also heavily based on our moods, and we love shows with great aesthetics,” Jeraldine adds. “We also love a bit of mindless fun every now and then, hence Vanderpump Rules!”

For the full behind the scenes experience, check out all of The Joffrey Ballet's Priceless digital content here.